When Ben Hattemer, GM of the Cincinnati (Frederick Steel) Division of Benjamin Steel first saw the PythonX® system, he knew it was a ‘gamechanger’, not just for his company, but also for his customers. “We processed some of the structural steel we supply, but it was pretty basic stuff.  I felt the PythonX would give us almost unlimited capability.”

That feeling proved true. Frederick Steel’s PythonX Structural Steel Fabrication System was installed in late 2015, and within days was producing beams with complex copes, coumpound miter cuts, weld prep bevels and virtually any other structural steel cutting or drilling operation you can think of. PythonX was the industry’s first ‘all-in-one’ structural steel fabrication machine that married multi-axis robotics with high-definition plasma cutting. Today, it is still considered the benchmark for advanced automation in structural steel fabrication. 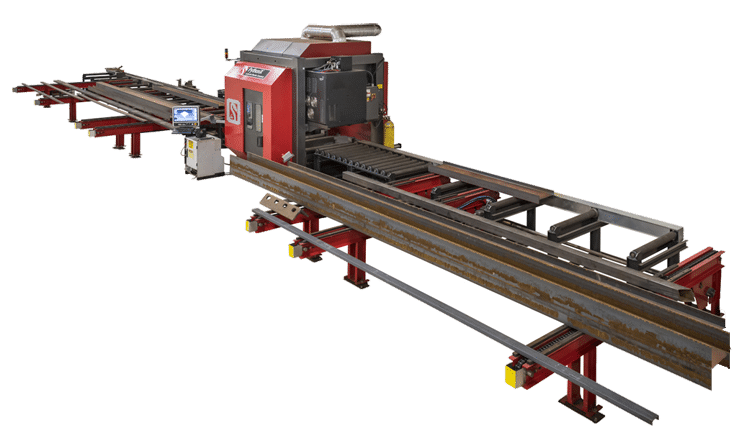 Beams, channel, angle and structural tube that need multiple cuts, bolt holes and other features typically move from saw, to beam drill line to coping torch – lots of time, setups and material handling. With PythonX, all operations are done on one machine, so a finshed piece is produced. The processing is fast and amazingly accurate, thanks to the PythonX proprietary software that reads the part detail drawing and automatically converts it into cutting instructions. This removes human programming – and potential human error – from the equation.

The video below shows just some of the capabilities of the PythonX system:

“We had an unusual structural part that we made from plate. We bent two pieces 90 degrees on a press brake, then plasma cut large cutouts in one of then, then welded them together to form a square tube. That’s a lot of cost. We replaced it with a heavy structural tube completely fabricated in one pass through Frederick Steel’s PythonX.”

Get Details On Our PythonX Strucutral Steel Fabrication System >